THE QUESTION EVERYONE HAS BEEN DYING TO KNOW:
RPE VS VBT

Autoregulating subjectively (via RPE) and objectively (via VBT) have been supported to be superior to PBT. However, how do they compare head-to-head? Join me as I dive into the first ever study to compare these two methods of autoregulation.

Wow! This was my first impression of the results of this study. They truly are astounding. Despite its limitations, this study has evidence supporting that velocity-based training (VBT) elicited more than twice the one-repetition maximum (1RM) improvements on the squat and bench press in comparison to rating of perceived exertion (RPE)-based training over the course of a 6-week training block (1).

Now, some of you may be thinking, “VBT is better than RPE!” Or, some of you may be thinking, “this is only one study. RPE is better than VBT!” I’ll start this blog post by explicitly stating that I personally think a conceptual framework integrating both VBT and RPE is the optimal model for an individualized and autoregulated model of resistance training programming. However, I must also state that optimal is unattainable. Why? We can always improve. There will always be more research, more discussion, more learning. If you ask me, this is incredibly cool. It means that as science improves, coaches and athletes can concomitantly improve.

In science, we typically compare one concept to another concept. Why? As scientists, we must ensure that the dependent variables under investigation are solely due to manipulations in the independent variable and not due to extraneous variables. In simplest terms, researchers typically compare one concept to another concept and everything else is the same (or at least controlled as much as possible). In practice, this often leads some coaches and athletes into thinking that “A” is superior to “B”, or vice versa. However, in practice, this black-and-white thinking process that concepts from the scientific literature are mutually exclusive is particularly troublesome. Why? The scientific literature provides us as coaches and athletes with concepts. That’s it. Well, mostly it. Now that us coaches and athletes have these concepts from the literature, we must identify which components of the concepts are beneficial, we must integrate those beneficial concepts, and then apply those concepts into practice. This concept, that we must think conceptually (whoa… some inception going on here) is what I’d like you to keep in mind as you read this article, as well as future articles and watch the webinars.

The primary purpose of this study was to compare RPE- versus velocity-based load prescription on strength adaptations and performance metrics following 6 weeks of resistance training.

No direct hypothesis was provided, and the authors seemed unbiased towards either method of load autoregulation.

Which method of load autoregulation is more effective at eliciting strength and performances outcomes over the course of a 6-week training block: RPE or VBT?

A total of 20 semi-professional rugby players from the United Kingdom with a minimum of 2 years of resistance training experience participated in this study (Table 1). A major advantage of the subjects used in this study is evident: all subjects were familiar with RIR-based RPE as this was the predominant load prescription method used by the team’s Strength and Conditioning Coach.

This study employed a randomized cross-over design; however, it was not a true randomized crossover design. Although randomized cross-over designs are advantageous, the manner conducted in this study exposes two primary limitations. First, there was no washout period between the two training blocks. Secondly, the two training blocks were not identical. These two points are important in order to mitigate second order effects and ensure that the effects observed are attributable to the condition under investigation and not due to previous exposure to a stimulus.

Throughout week 1 of each training block subjects self-selected the appropriate loads for the first set on each exercise that corresponded to the prescribed intensity. On subsequent sets, if the velocity or RPE corresponded to the prescribed intensity, no load adjustments were made. However, if the velocity of any two reps was outside the prescribed velocity range or if the recorded RPE was outside the prescribed RPE range, load was increased or decreased accordingly. Regardless of the number of reps that were outside the prescribed velocity range or how far off the recorded RPE was from the prescribed RPE, the load was adjusted 5 kg and 1 kg on barbell and dumbbell exercises, respectively. The load used for the initial set of each subsequent week’s training session was the load used for the final set of the prior week’s training session. A limitation of load prescription for the VBT group is that the PUSH band accelerometer was used; however, it has been demonstrated to have significantly lower validity (accuracy) and reliability (consistency) than the Speed4Lifts linear position transducer at monitoring barbell velocity.

This study analyzed the data with magnitude-based inferences (MBI); a method of data analysis that has gained some popularity in exercise science studies in recent years. Without diving into excessive detail, minimal researchers are proponents of this statistical method, while most statisticians are not. In short, in exercise science studies comprised of small-to-moderate sample sizes, magnitude based-inferences substantially reduce type II error rates; however, they substantially inflate type I error rates. An illustration of type I and type II errors is illustrated in Figure 4. 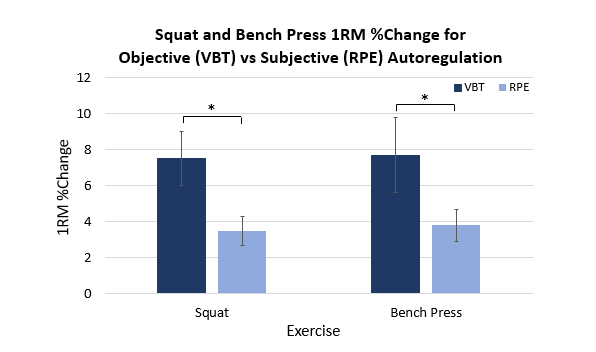 In the first ever head-to-head comparison of VBT to RPE-based load prescription, it was unarguably clear that VBT was the champion. However, the real question is: why? Why did VBT come out on top? First, let’s solely focus on this study. Second, let’s compare it to the previous aforementioned studies on load prescription.

Why Does VBT Seem to Elicit Superior Gains to RPE?

In the presently reviewed study, why did VBT result in significantly greater 1RM strength improvements in comparison to RPE if the percentages of 1RM for both groups were intended to be matched? The RPE group was most likely training at a lower proximity from failure and at a lower relative intensity than the intended prescription; however, the VBT group most likely training near the appropriately prescribed proximity from failure and relative intensity. Be cognizant that the intended RIR for the maximal strength block and strength speed block were 1.25 and 2.5 on average. Figure 6 illustrates what I hypothesize may have been the proximity from failure in terms of repetitions in reserve (RIR) between the VBT and RPE groups. Note that the error bars are approximately the same for both the VBT and RPE group. Why is this the case? The VBT group did not utilize individualized-load velocity profiles; thus, although on average most subjects were most likely close to the intended RIR, many were most likely somewhere above or below that intended RIR. Of course, we would expect these error bars with the RPE group since RPE scores tend to be inaccurate. 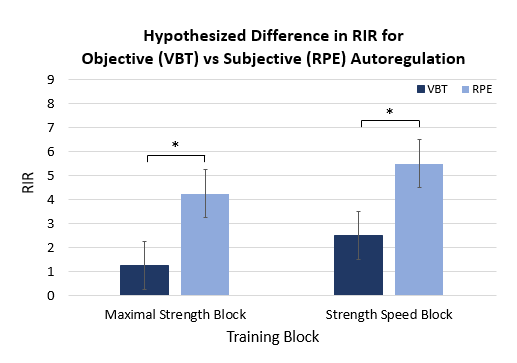 The second primary reason why I think VBT may outweigh RPE is due to the inherent feedback component that velocity possesses. “Landyn, you take your training so seriously” or “Landyn, why do you take your warm-ups so seriously?” or “Landyn, why do you lift so explosively during every rep”. These are common questions that I receive. I’ve always purposefully trained with intent. However, I think that incorporating velocity into training makes intentional training much more prominent. Every session, every set, every repetition is a competition between you and the velocity. Sounds silly? No, we have data supporting that velocity feedback improves both competitiveness and motivation to train (8). Finally, when in a team environment, I think that a competitive atmosphere surrounding velocity is created between teammates in an attempt to lift faster than each other. In other words, whether you train alone or with others, the inherent competitive component of VBT provides an added benefit.

In the introduction I mentioned that there are currently 5 studies investigating either method of autoregulation (VBT or RPE). Now, let’s look at the specific findings from each study. Again, one study on each type of autoregulation method (VBT or RPE) demonstrated significantly greater strength improvements over traditional PBT. Let’s compare the findings from the presently reviewed study to those previous studies, focusing on the PBT vs RPE studies first.

The two studies on PBT vs VBT are illustrated in Table 6. Overall, the squat and bench press 1RM percentage changes from the VBT group in the presently reviewed study align with the findings from Dorrell et al. (2019), which was also a 6-week training study. However, the findings from Dorrell et al. (2019) are slightly higher, which is probably largely due to the more aggressive resistance training protocol employed. However, why did Orange et al. (2017) observe no difference between PBT and VBT? Without diving into specifics, the resistance training protocol in the Orange et al. (2017) study simply wasn’t aggressive enough to observe any difference between groups. and progressive overload was minimal.

Now that we have a long-term training study comparing RPE to group load-velocity profiles for load prescription, the next step is to compare individualized load-velocity profiles, to individualized PBT-based training, and RPE-based training. Realistically, someone is probably conducting a study similar to this somewhere, and we just don’t know it yet. I know this presently reviewed study was one long awaited, but nobody knew when it was coming.

My hypothesis of the results of an 8-week longitudinal resistance training study comparing these three methods of load autoregulation are outlined in Figure 7. To clarify, I don’t think that the subjects should train at a prescribed 8 RPE (2 RIR) for the entirety of the study, rather I’ve simply presented that here for ease of interpretation. I think that the individualized VBT group would be nearly spot on every single week with the prescribed RIR. I think that the RPE group would typically tend to underestimate their RIR on average. However, since most subjects obtained for studies are unfamiliar with the RIR-based RPE scale prior to participation, their subjective RPE ratings may improve slightly over time and they may get closer to the intended prescribed RIR towards the end of the study, but I still think that this would be very far off. Finally, I think that the individualized PBT group would be very close to their RIR at the beginning; however, as the study ensued they would most likely be at increasingly greater RIR as their predetermined 1RM exceeded their actual 1RM. Overall, I think that strength adaptations would be significantly greater for VBT over both RPE and individualized PBT. Furthermore, I think that RPE would be slightly superior to individualized PBT, but with no statistically significant difference between them. 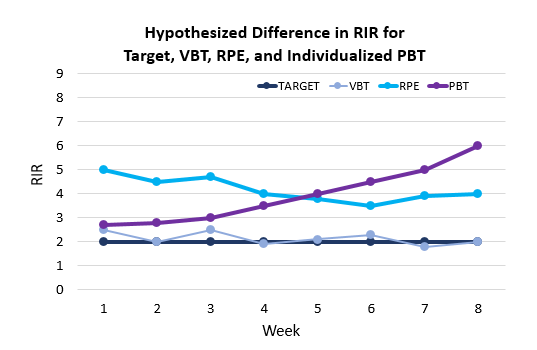 Conceptual. There’s that word again. Remember, this study simply provides us with the concept that VBT may have an edge over RPE. With that said, based on my experience as both a student and researcher as well as a coach and athlete I think that the “optimal” model for an individualized and autoregulated approach is a conceptual framework integrating VBT, RPE, and % of 1RM. If you’re interested in how to develop this model for powerlifting and practically apply it into your own training, please check out my Original Seminar. If you enjoyed the Original Seminar and are seeking something more in depth, please check out my Seminar Series.

There’s not too much else to say; velocity podiumed on top in this study. A concluding summary of the advantages and limitations of this study can be seen in table 7 and table 8, respectively.