Strength training has often been understood as a really hard workout, with very high loads and a very high effort character, but the evidence has long been gained from those slogans as the “No pain, no gain”,  which have done so much damage to the world of training. This more traditional load percentage-based workout, which is typically estimated through a 1RM test consists of certain limitations that can play against our performance.

TRAINING WEAKNESSES BASED ON % LOAD

On the other hand, we have the VBT and a number of advantages that training that does not focus on velocity does not have. But  what’s with the VBT?

If you’re reading this, you’re probably already interested in using Velocity-Based Training (VBT), but broadly speaking, VBT is a training mode that puts the focus onachieving the maximum possible velocity in your lifts or movements.

Gonzalez –Badillo’s research found an almost perfect relationship between %1RM and the corresponding velocity in the individual’s velocity profile. In other words, when a subject tests their 1RM, their velocity at the corresponding percentages of 1RM always stays the same.

In addition, if you have an encoder with the onethat Vitruve offers, the workouts will be much more accurate since we will be training with the % load really programmed and you will have constant control, session by session of how your progress is going. If you want to delve into the topic,  I recommend this blog post: What is Velocity Based  Training?

For all these advantages and many more that I will tell you below, give the Vitruve team we bet on velocity-based training (VBT).

How do I start training VBT if I  never  have?

Before you start training VBT you have to stand and know what level you are at. Have you just started training, have you been training for a while and mastering the technique of exercises, do you have a Vitruve encoder?

If you don’t know where to be, don’t worry, from the Vitruve team we make it easy for you:

Initiation level: For people who have just started training, it is preferable that they focus their focus on the technique and perform the exercises at a controlled velocity. After a learning process of these exercises, we can have a little more impact on that intentionality of seeking a higher velocity and progressively increasing the concentric velocity of movement.

Basic level: If we have already been performing certain exercises with a correct execution for a while and master the technique, we can move on to the next level where we will seek to perform the movement as fast as possible in the concentric phase. When you notice that you lose a significant velocity with respect to the first repetition (20-30% of the velocity), FOR THE SERIES.

“The more fatigue, the less strength, and therefore velocity, we will be able to generate”

Advanced level: In the previous levels, you didn’t need to have a device, but at this level, you already have a  Vitruve encoder, with which you can immediately see your % velocity.  Our goal will be to beat our own personal brand with the burden you use on a regular basis.

In addition, you can program the degree of intra-series and inter-series fatigue through % velocity loss. This way, when you repeat with that % velocity loss compared to the first series, the encoder will let you know so that you stop the series.

Expert level: This level is already for people who want to spin finer in their workouts. What we will do is look at the velocity tables – % load that we commented on later and even being able to create your own velocity profile. So, if we want to train, for example, at 75%, we will look during heating for the load that we can move at ‘X’ velocity and work with the exact % load that we want for that day.

The”type” tables, being normative and generic, have a slight problem since we are not all the same and there is a certain variability between people. That’s why it’s recommended to create your own force-velocity profile. But  how do I do it?

If you have a Vitruve device, it’s really very simple. During warm-up, which will be closely related to the exercise or movement that we want to measure, you will choose 4 loads, from a low load to a very high load. In this way, the application, through equations,will create your own personal curve and that when you perform ‘X’ exercise you will have your individual and exclusive percentage fully insured. Interestingly, every month and a half approximately we reevalue our velocity profile to adjust loads.

Every day we can work with the burdens that we can lift that same day, because we know that every day our athlete or ourselves have a different working capacity. The encoder is going to give us the exact load to lift at the velocitys we want to handle that day. 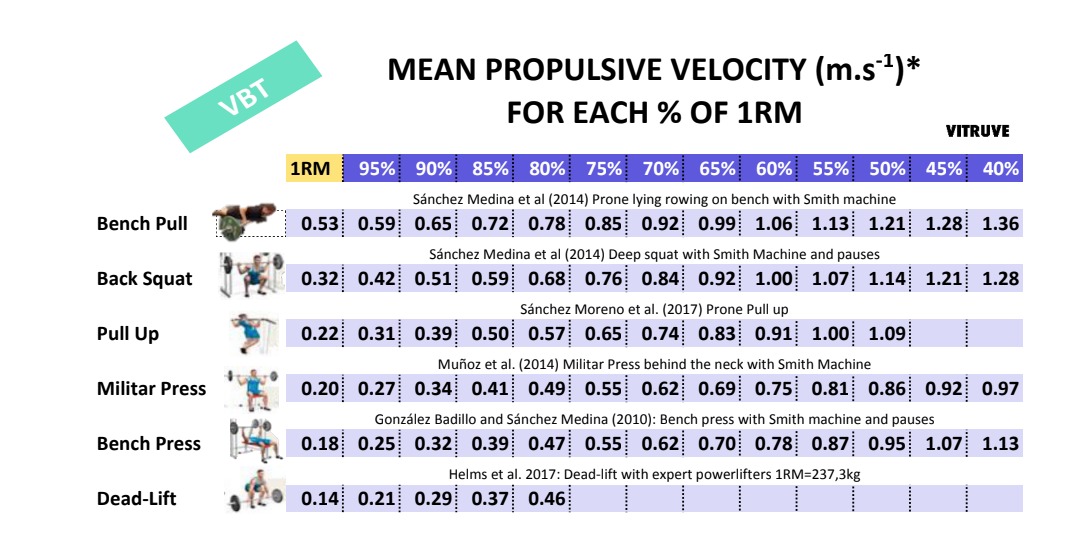 In addition to all the advantages that we have already mentioned, having an encoder like Vitruve, offers you an incredible plus in terms of motivation thanks to the immediate auditory feedback that you can get from the application without having to be aware of the velocity on the screen and allowing you to maintain maximum concentration in each lift.

Simply wanting to beat your own record is going to make you want to lift faster even without thinking about it.

If you want to know more about the velocity-based training offered bythe Vitruve linear encoder, we recommend that you keep an eye on this

VBT in your workouts

END_OF_DOCUMENT_TOKEN_TO_BE_REPLACED

How to Getting Faster at Sprinting?

END_OF_DOCUMENT_TOKEN_TO_BE_REPLACED

A Powerlifter’s Guide To Velocity Based Training

END_OF_DOCUMENT_TOKEN_TO_BE_REPLACED

How to Getting Faster at Sprinting?

END_OF_DOCUMENT_TOKEN_TO_BE_REPLACED

A Powerlifter’s Guide To Velocity Based Training