In this article we will present the key points of the study published in the Journal of Strength and Conditioning Research (2019).

The aim of this study was to compare the reliability and validity of seven devices available on the market to measure the speed of movement during the bench press exercise.

It also studied the variability in the measurements that occurred in the devices between different repetitions.

Two test sessions were completed with a sample of fourteen men. All of them knew the bench press movement and did not have any type of musculoskeletal injury.

Two sessions were performed with a difference of 48-72 hours between them.

In the first session the One Rep Max was determined (1RM) and in the second session three repetitions with five loads with the following percentages were performed: 45-55-65-75-85%.

Mean velocity was taken as a measurement simultaneously with all the devices. They were measured:

2.- 2 linear position transducers (Chronojump and Speed4lits) IMPORTANT NOTE: Speed4lifts encoder is now VITRUVE encoder, we have just change the name, but the product, the hardware and the way it measures is a 100% identical.

3.-1 optoelectronic sensor based on a camera (Velowin).

4.-1 application for Smartphone (PowerLift app (Now it is called My Lift))

In the following image it gathers a representation of the taking of data together with all the devices ordered from the most to the least reliable. 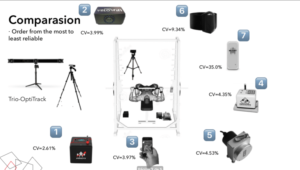 The hetereoscedasticity of the results was also studied. This means the value of variability of each device.

It was observed that although all devices always present some error, only in the measurements with Vitruve the error in the data was not variable.

That means that it always output consistent data, under the same circumstances, something very important in velocity based training, where a small variation on the velocity can change our One Rep Max and fatigue a lot.

These results suggest that velocity/position linear transducers, camera-based optoelectronic systems, and the smartphone application could be used to obtain accurate velocity measurements for restricted linear movements.

On the other hand, wearables based on accelerometers (inertial measurement units) used in this study were less reliable and valid for measuring barbell velocity.

As a final conclusion, the authors themselves with these results suggest that it is this device, Vitruve, the most appropriate to measure execution velocity due to its high precision, ease of use and affordable price.

Get the Reliability Research

END_OF_DOCUMENT_TOKEN_TO_BE_REPLACED

This project, within the framework of the ICEX Next Program, has had the support of ICEX and the co-financing of the European FEDER fund. The purpose of this support is to contribute to the international development of the company and its environment​