Strength training is done in almost all sports nowadays. You dedicate yourself to running, throwing, scoring goals or lifting bars, part of your training will be strength and probably with loads. That’ss why optimizing performance achieved with strength training should be one of the goals of any athlete or coach. In this post we are going to talk about velocity-based training (VBT).

Force (F) = Mass (M) x Acceleration (A)
Little by little. The mass (M) of an object is the amount of matter it has. It is measured in kilos. It should not be confused with weight, which is simply the mass of a body by gravity, and is measured in Newtons (N).

Force (F): What we should know about force (F), is that it’s represented in the acceleration that an object with a certain mass carries:

This is the basis of Velocity-based training (or VBT). If the same person measures the speed of the bar execution every day when they train in the same exercise, and one day, they move that weight faster, that day they will have applied more force. Since the force is something that the human being can train (and improve) we will be able to know the force that we are applying if we measure the acceleration of the object that we are moving.

Until recently, training used methods such as 1RM and its percentages to train (PBT). This method consisted of, basically, knowing the maximum amount of kilos that can be lifted in each exercise, and deciding at what intensity you were going to train during a cycle based on a percentage of that amount of kilos.

But this raised a number of problems: The first of all is that the maximum amount of kilos that a person can lift a day varies greatly. So if you had to lift 70% of your RM from three months ago, you probably would have gained strength already, and you would train with a weight that, although three months ago was 70%, right now is 60%. The second is that we cannot carry out 1RM tests every day to find out what it is, because this means a lot of fatigue for an athlete, and it is also very harmful. These are the greatest problems to deal with, but this method has other drawbacks as well.

So, they began to investigate about the speed of the bar, and discovered, in an interesting article done with the bench press exercise, that each person could move a % of the RM at a certain speed. That is, for example, in bench press, all subjects raised their MRI to approximately 0.16 m / s2. After analyzing all the data, they found that there was a very high relationship between the speed at which the bar moved on the bench press, and the % RM that was being used. (González-Badillo & Sánchez-Medina, 2010). And they made a graph relating the data of both variables for all study subjects, this one here: 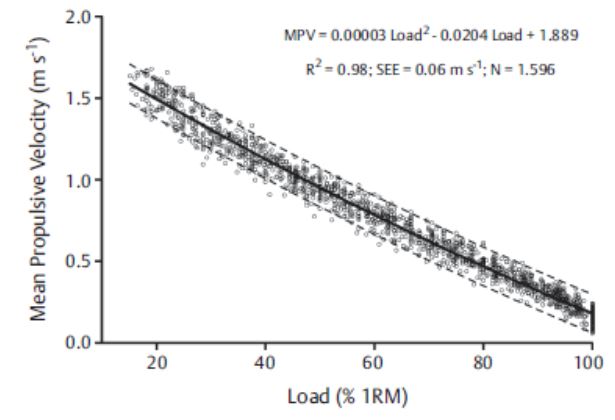 Where it can be seen that as the RM percentage increases, the speed decreases, following a clear pattern. They repeated the study 8 weeks later, in which 56 subjects who had performed the first test performed an equal second test, and saw that despite the fact that their training level had changed, the speed at which they moved the bar fo r% The RM had changed little. Although it has been concluded later, that athletes can have a very different force-velocity curve in the same exercise. (Cormie, McBride, & McCaulley, 2007; Meylan et al., 2015).

Calculate the 1RM with the force-velocity profile

With that the researchers concluded, each person moved a % of the RM at a specific speed in a specific exercise. And if we make a graph putting a point at the height of the speed at which we have moved the bar for each% of the RM, we get a drawing similar to the one above. This is known as a “force-velocity profile”.

The force-speed profile, defined by the% of RM or load that we are using, and the speed at which we move it, could be defined for each subject on the bench press, and later it was also discovered that there is a very similar relationship in the squat and inverted rowing exercises (Sánchez-Medina, Pallarés, Pérez, Morán-Navarro, & González-Badillo, 2017; Sánchez-Moreno, Rodríguez-Rosell, Pareja-Blanco, Mora-Custodio, & González-Badillo, 2017 ). Therefore, if we knew the speed of the bar, we could know what % of the RM the person was using, and if we know their force-velocity profile (since not all people move a % of the RM at the same speed), the maximum weight that person can do in a specific exercise. A new paradigm was born.

In future articles we will talk more about velocity-based training and why the Vitruve encoder is a great option if you want to improve your workouts. 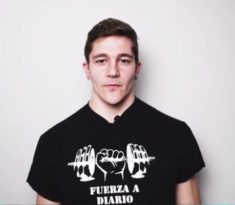