How I started with VBT

My coaching journey with velocity-based training

A couple of years ago I was contacted by the Vitruve team asking if I would be interested in collaborating with them as a writer and researcher on their blog. At the time, I was studying Physical Activity and Sport Sciences and, although my knowledge at the time about Velocity Based Training (VBT) was practically nil, the opportunity was unique.

Without a doubt, that was the turning point that caused my current interest in strength training and especially how it can be much more efficient if you train through VBT, one of the most innovative methods that allows you to focus on speed and that already has numerous evidence supporting its effectiveness (Włodarczyk et al., 2021; Balsalobre-Fernández & Jiménez-Reyes, 2014; Dorrell et al., 2020). Additionally, linear position encoder units are more affordable now than ever, and therefore more available for athletes to use.

Research by González-Badillo (2010) found an almost perfect relationship between the %1RM and the corresponding velocity in the individual’s velocity profile. In other words, when a subject tests his 1RM, his speed in corresponding percentages of 1RM always stays the same. Something fundamental to be able to objectively know the intensity of the load we want to mobilize.

On a personal level, in the role of coach, doing my training through VBT has allowed me to know quickly, intuitively and, most importantly, in a totally objective way, different training variables such as the intensity of the load of exact form or intraseries fatigue, that is, the fatigue that occurs between each repetition and that is measured through the loss of speed. At the level of my athletes, they have been able to be more effective and efficient, in addition to having achieved greater adherence to their own training. Simply knowing the speed of each of their lifts instantly allows them to fight against each other and challenge themselves to lift faster than last time.

If you are in this article, I understand that you already know what VBT is, but just in case and before starting with more complex concepts, we are going to define what this type of training is based on. VBT is a training method that is based on moving a given load at the maximum possible speed in the concentric phase of the movement. (Gonzalez-Badillo et al., 2017). Through an instrument that measures the speed of displacement, such as a linear encoder, it will be possible to know the exact speed at which the load in question is being lifted, allowing you to know the percentage of intensity that this same load poses and what the load you could move in a single rep is, i.e., your 1RM.

This 1RM varies every day, either because the athlete has slept worse, is more stressed, his diet has changed or any factor that can influence performance. This is what makes powerlifting so interesting. The strongest does not always win, but the best lifter wins, that is, the one who lifts the most kilos on the day of the competition.

Do you want to know how the best powerlifter trains? Do you want to improve performance in your lifts? At VITRUVE we tell you everything!

Taylor Atwood is a 33-year-old American powerlifter, 2-time IPF world champion in the -74kg category. In his second to last performance, at the USAPL Raw Nationals in Florida, he went eight of nine and came in at an unbelievable 1,800 pounds, nearly 11 times his own body weight. Atwood set the American records for the squat, deadlift and total and although he now holds all four records at -74kg, since the USAPL is a national organization, a lifter cannot set world records in this meet. However, Atwood’s new total is the heaviest of all time at 74kg (according to Open Powerlifting). 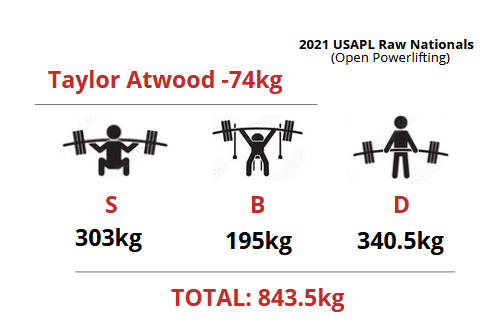 In 2018 he was one of the first powerlifting athletes to get a Vitruve encoder. His trainers began using the encoder measurements to quickly and easily monitor the progress of their workouts. They considered different variables such as the mean propulsive velocity (MPV) of their heaviest lifts, combining it with the RPE (Rate of Perceived Exertion) and AMRAP (as many reps as possible) to validate the estimated 1RM.

They also used the encoder in competition warm-ups as the main indicator of readiness. They compared the MPV of the bar at that same moment with the MPV of the previous weeks with similar weights. If he moved it at the same speed or even faster, it indicated to Taylor the level of preparation and performance.

From the Raw Nationals in 2018 to November 2020, Taylor’s coaches have been using VBT with the goal of being more effective and efficient in training planning, as well as being able to objectively monitor an athlete status in real time.

How did Taylor Atwood get so strong?

Taylor already from the beginning showed a high potential, and with the help of people like Jason Tremblay or Ben Esgro, his trainers, they managed to exploit his full potential.

In this article written by one of his coaches on the Vitruve blog, he narrates firsthand different tips to achieve a performance as good as Taylor Atwood’s. Good planning and evaluation of progress can make a difference.

What training program does Taylor Atwood use?

Like any other high-level athlete, powerlifting follows a plan according to the different competitions on the calendar. Neither he nor his coaches are going to go around saying what his training is like or how he distributes the different variables such as volume, frequency or intensity. However, social networks are a showcase in which we can observe slightly and with a good eye some variables can be deduced. From what Taylor Atwood shows on his Instagram profile, he does not usually train with very high loads, that is, on several occasions he shows different lifts 4-6 repetitions, although there are also many other occasions that logically he must put himself in a competitive situation lifting closer to your 1RM

And like any powerlifting athlete, in addition to the basic competition exercises, he also adds accessory or variant exercises, essential to avoid imbalances and become a much more complete athlete.

Also refer to the use of a linear encoder that allows you to know in real time the intensity of the load that you are mobilizing or the intra-series fatigue, that is, the fatigue that you may have between each repetition within the same series, as the hashtags of his different Instagram posts indicate.

With the help of an encoder like the ones that Vitruve offers and the one that Taylor Atwood uses, we will be able to know different variables in a totally objective way that will allow us to be much more effective in our training. 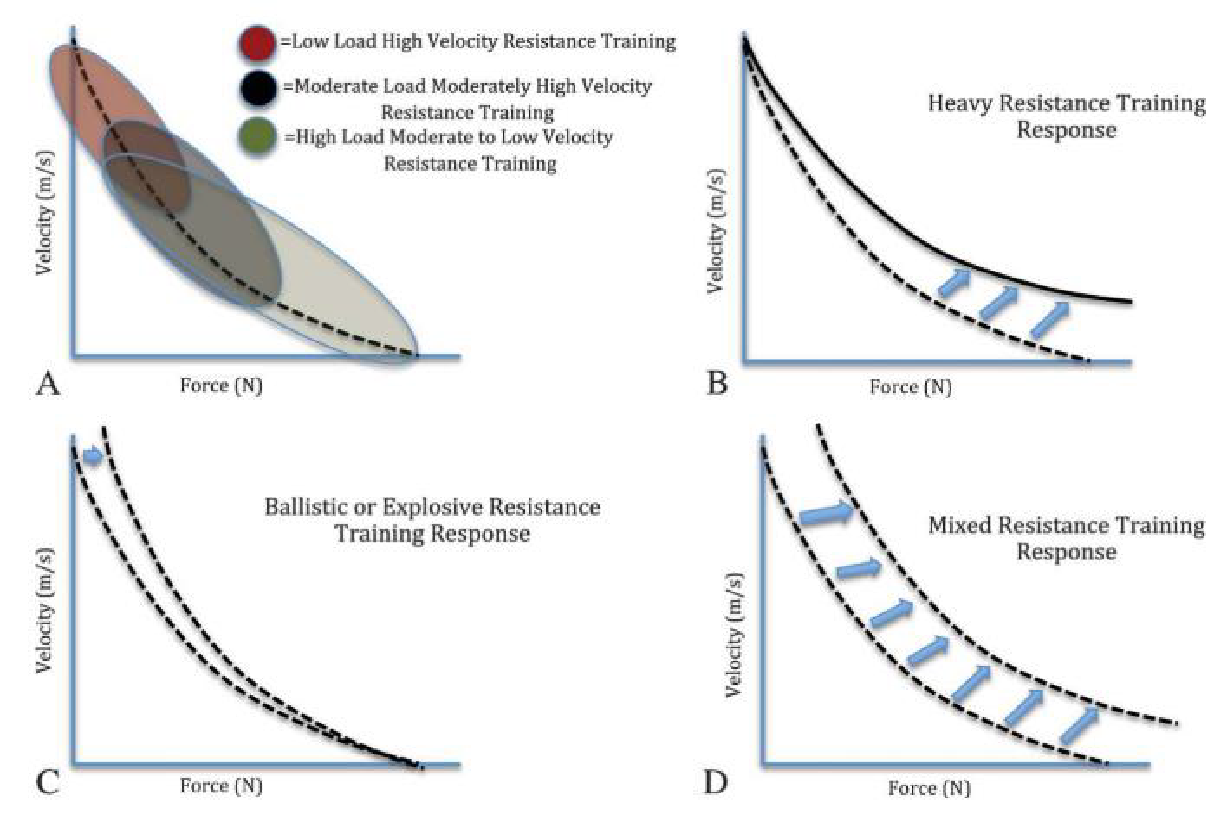 In this figure, it can be seen how the curvature can vary depending on the training zone in which priority has been given according to the sports discipline and its requirements. Training with high loads (>80%1RM) will produce greater improvements in the low speed and high force zone.

Thanks to devices such as those of Vitruve we will be able to know exactly which side of the curve we are prioritizing in training. Also, as we have mentioned before, the 1RM varies every day and with it the maximum level of performance that we can achieve. With a Vitruve device, we will be able to know the 1RM of that exact day without having to do it directly.

Benefits: before and after

Without a doubt, the improvements before and after starting to train with VBT are more than evident and their own marks in the championships dictate this.

If we look at these figures, more specifically the total section (second column from the right), we can see the increase in the total number of kilos lifted in competition.

Before you start training

In just 3 years and accounting for the stoppage of competitions due to the global pandemic by COVID-19, he has improved his records very significantly.

With all this information, you now know a little more about all the benefits that VBT can bring to you in your strength training. Here are some of the most impressive feats of Taylor Atwood in real competition, after all the work done with velocity-based training:

VBT has countless evidence that demonstrates and validates this type of training as a very useful tool, which should be considered by coaches and athletes if they seek to optimize results in order to improve performance.

It will facilitate the decision-making process for coaches during planning, in addition to individualizing the session quickly, intuitively and objectively monitoring different variables. It will also allow athletes to be more effective and efficient in strength training, in addition to producing greater adherence to training for those athletes who do not enjoy being in the weight room as much.

Taylor Atwood is simply a clear example of what VBT can do to improve sports performance, but there are many more powerlifting athletes such as Teresa Parsons (2x Canadian National Champion), as well as other athletes from different sports disciplines such as the American rugby team.

Are you aiming to improve your performance through VBT, or do you prefer to continue training in a less efficient way?