Physical exercise has become an exceptional strategy for improving people’s quality of life and extending life expectancy (1). In addition, physical exercise provides a number of benefits that are similar to any type of drug, be it an antidepressant or an anti-inflammatory. In today’s world, physical exercise is part of the daily routine of a large number of people. However, still, a vast majority of people do not exercise and spend long hours of the day sitting or lying down. A sedentary lifestyle has already been shown to be one of the most influential factors in poor physical condition and lower quality of life (2). For this reason, major organizations such as the World Health Organization recommend at least 150-300 minutes of moderate or vigorous physical activity per week.

On the other hand, it has long been demonstrated that nutrition plays a very important role in people’s health and well-being (3). The objective of nutrition is to know the best foods and the best nutritional strategies to promote good health. We could say that an adequate diet can help prevent serious diseases such as cancer or reduce the impact of metabolic diseases such as hypertension or type II diabetes mellitus (4, 5).
Taken together, physical exercise and nutrition are crucial for the development of good health and fitness. However, there are people who, because of their working conditions or the leisure activities they practice, require special attention in terms of nutrition. This is the case, for example, of high-level athletes who spend hours and hours doing physical exercise and are subjected to high stress. In their case, they need supplements that allow them to develop their activity in the best possible conditions. An example of this would be the well-known Olympic athlete Michel Phelps who, according to his coach, when he was at his best ingested a total of 12,000 kcal per day. Taking into account that an average person requires approximately between 1500 kcal and 3500 kcal, depending on their physical activity, lean mass and gender, among others, Michel Phelps ingested almost 4 times more “energy” than normal. And this is not an isolated case, for example, any professional cyclist requires a much higher daily caloric intake due to the time spent in training and the energy lost in training.

In addition, these people not only require a higher intake (which would affect the type of food they have to take or the type of diet they must follow) but also require other substances-supplements to be able to give the maximum in the competition. For example, vitamin supplements, increase of certain substances so that the body is in its full condition every day, or a higher protein intake to prevent proteolysis. This activity that we call “supplementing” has not only remained in the world of sports. Moreover, nowadays a high percentage of people who go to a gym or who practice physical exercise take some kind of supplementation. In today’s post we are going to analyze what science says about the supplements most used by society and whether there is any benefit or harm for athletes. First, we will analyze those supplements most used in endurance sports (cycling, rowing, marathon, ultra Trail, etc.) and, secondly, we will analyze which supplements are consumed to a greater extent in sports related to strength. Finally, we will analyze the myths related to supplement intake and recommend which supplements are best for the general gym-going population.
It is important to note that this blog does not recommend taking any supplements without first contacting your doctor, nutritionist or trainer. The person in charge of confirming the intake of any supplement should be a doctor after the recommendation of a nutritionist.
As mentioned above, we will first focus on supplements aimed at improving performance in endurance sports. We have to understand that, for energy production, i.e., for the production of body movement, the body uses different metabolic pathways. As we can see in Figure 1, depending on the intensity of the exercise, the metabolic pathway that is activated is one or another. For example, when the stimuli are of low intensity there is a predominance of fatty acid oxidation while when the intensity is much higher there is a greater predominance of carbohydrate (CH) oxidation. However, the first metabolic pathway to act is always that of carbohydrates and that is why glycogen stores (forms in which carbohydrates are accumulated) must always be replenished for a competition. In fact, not only supplementation, but a good HC load before any competition should be essential. We cannot understand no endurance competition can take place without full glycogen stores. 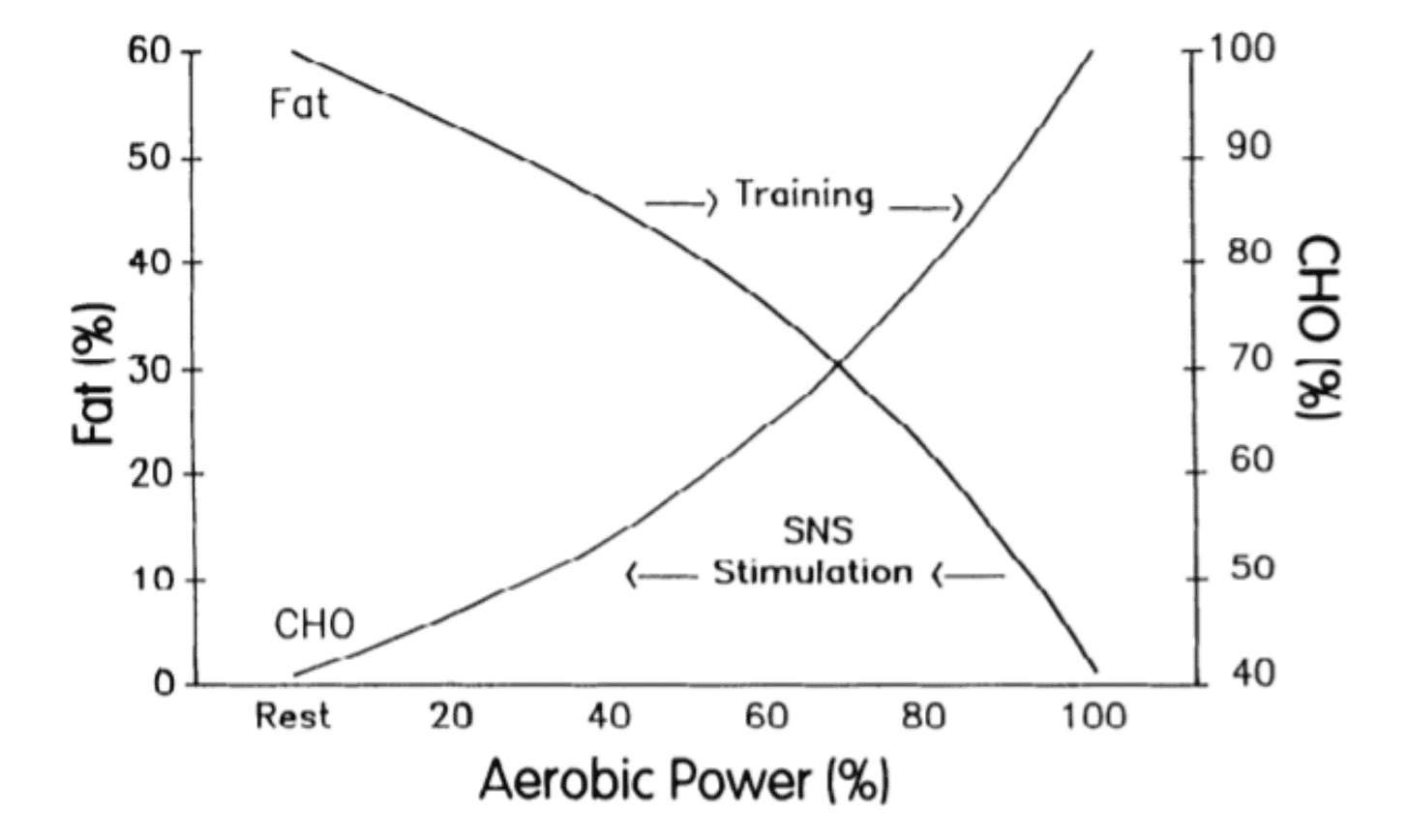 Once it is known that the HC are essential, these deposits that we have talked about are depleted as the competition passes and it is often necessary to replenish them quickly. This is where gelatins or gels for athletes come in, which are usually energy-dense elements that quickly provide the HC needed to continue competing and to keep performance from dropping. However, it is true that they tend to cause stomach problems or sometimes they are not tolerated correctly (6). That is why we will always recommend using them first during training to be effective on the day of the competition. Gels usually have a higher HC concentration (50-60%) and gelatines much less (5-10%). On the other hand, “energy” bars are also usually a good solution as they have 60-80% HC. All of them have proven to be useful in endurance athletes such as triathlon (7) and it seems that the HC combination of glucose/fructose and maltodextrin with a 0.5-1/1 ratio may be the best solution (8).
On the other hand, talking about protein intake (the mother of supplementation) we first have to take into account the type of protein supplements that exist and where they come from. There are whey proteins which are the best known for their very high value for sportsmen and women and have proven to be effective for reducing fatigue after a strength training program (9) and for increasing muscle mass and strength levels (10). There are also casein proteins that provide a good amount of essential amino acids and remain for approximately 5-7 hours in the bloodstream (11). And finally, there are protein hydrolysates that contain “smaller” proteins that help replenish the body’s glycogen stores (12). Currently, any athlete, whatever his specialty, should take between 1.8 and 2.2-2.7 g/kg of body weight if he wants to maintain a correct protein synthesis and if he wants to prevent the loss of muscle mass. In fact, it is known that with the passage of time the body tends to lose muscle mass, so it is recommended that elderly people increase their protein intake to prevent this loss. We could say that protein supplementation is a must in the world of physical exercise and sport.
Finally, we will focus on two supplements that have already proven to be effective for both endurance and strength sports performance. These are two supplements that promote quality training and push the body to give its best. In this case, we are talking about caffeine and creatine.
Creatine is a type of supplementation that has two clear objectives. In the first instance it favors performance in very short duration tests of 25-35 seconds and of very high intensity and it also helps protein synthesis and reduces the onset of fatigue. That is why it is consumed by endurance athletes as well as strength athletes. Its administration during training increases the quality of training and puts the body under greater stress, so the improvement will be greater. For example, if I am able to run 200 meters at full speed and after a very short time I have the strength to run another 200 meters at full speed and with a later onset of fatigue, the work time I am doing is greater, so the adaptations to exercise will also be greater. In the same way, if I manage to perform weight training at a higher intensity, the increase in strength and muscle mass will be greater. Furthermore, it has been shown to be beneficial on numerous occasions (13-15) and is not harmful to health.
On the other hand, caffeine (a substance widely consumed by the vast majority of us) seems to have a positive effect on physical performance in endurance athletes (16). In fact, a meta-analysis in 2005 already demonstrated that supplementation with caffeine was effective in reducing the sensation of fatigue during exercise and, therefore, improving performance in trained individuals. As for its effectiveness during strength training, there is still some discrepancy as to whether or not it helps to express greater muscular strength, although the most recent research confirms that caffeine helps to improve performance in certain movements (17).
By way of conclusion, we can confirm that there are certain supplements with a high degree of evidence and that they do not have repercussions for health. All the supplements discussed in this post enjoy a very relevant clinical practice and it has already been demonstrated that they can promote performance. However, there are other types of supplements such as BCAAs, Ecdysterone, nitrates, or L-Carnitine that are still in doubt. In future posts, we will analyze these supplements in detail and see which recommendation is the best.