Currently, the method used to express the intensity of lifting a load is the % of 1 RM.

As we have explained in previous articles, the 1 RM of each exercise is a good method to know our fitness, and the velocity of execution allows us to know it without having to do a maximum test.

But how can the velocity of execution help us express the effort that really involves doing repetitions with a burden for us?

In weight lifting, the  EC is defined by showing the number of repetitions we make, with respect to the total of repetitions that we could lift with a specific load.

It is expressed as follows: first the repetitions that have been made are written, for example, 6, and then, in parentheses, those that could have been reached as maxim. Let’s say that they are 10. Result: 6 (10).

This is a very good reference to know the real effort that is a burden for us, since, if we know how many repetitions we can do with each % of the 1RM, we could plan the training based on it.

For example, knowing that I can do 10 repetitions with the 70%, I could schedule to do 6 repetitions, and I would know that I have to leave 4 is reserve. (We could say that we have done 6 reps with RIR 4 (Reps in Reserve).

This raises an interesting method to express the effort that a load supposes for us: the repetitions made with respect to the total could be a good method to program the training based on a concrete effort.

1.- Not everyone is able to perform the same number of repetitions with the same %. Which means that there are no previous rules or guidelines that can be used on this method.

2.- When performing sets with a % of the 1RM, in case of doing the same number of repetitions, some subjects will perform a greater effort than others, since they will work with a higher EC.

As we can see, one remains at 2 of the failure and the other at 4. This has its implications in terms of adaptations, since they have made a very different effort despite having made the same number of repetitions.

But this is also a problem, because one if them would do the series with half their EC, and the other would do it with more than the half. What again, involves different adaptations: the effort they have made is not comparable. 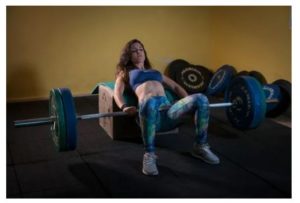 Training based on the velocity of execution solves this problem.

In a study it is demonstrated that there is a very high correlation between the repetitions that we left in reserve (RIR) (expressed as a percentage), and the speed that is lost during the series (Gonzalez-Badillo, Manuel, Mora-Custodio, & Rodriguez-Rosell, 2017).

1.-To know the effort that the athlete have made in a set, it is interesting to use the number of repetitions made regarding the total that they could have made. But this method has some disadvantages:

There is a very high variability in the amount of repetitions that people can do in a set.

2.-On the other hand, all people will have made the same effort if they have lost the same % of the velocity of execution with respect to the fastest repetition.

3.-There is a very high relation between the % of repetitions made and the % of velocity lost between 50% and 70% of the One Rep Max.

As a PhD in Physical Activity and Sports Sciences, my life revolves around Sport.