One of the negative aspects of eccentric loading is that it induces greater muscle damage and negative acute functional consequences than other types of exercise38. The combination of high force and reduced fiber recruitment causes high mechanical stress on the striated muscle that may lead to focal microlesions of the muscle fibers39.

Several studies described molecular changes within the sarcomere and myofibers following intense and/or unaccustomed eccentric exercise 40,41. The sarcomeric disorganization has been associated with disruptions to the sarcolemma and the extracellular matrix, swelling of mitochondria, and fragmentation of the sarcoplasmic reticulum42,43.

The cellular disruption of the muscle fiber triggers an inflammatory response due to the secretion of pro-inflammatory cytokines which leads to an immune response mediated by the infiltration of neutrophils and macrophages44. The inflammation would ensure the removal of tissue debris from the injured area and promote muscle repair by activating satellite cells in a process called chemotaxis45–47. 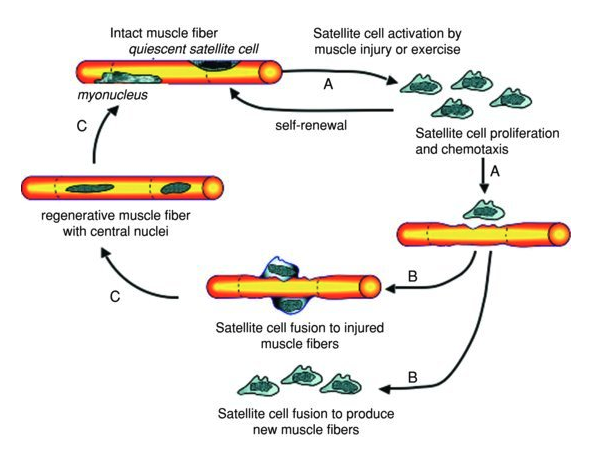 Exercise-induced muscle damage (EIMD) is observed immediately after exercise, can gradually extend to a larger number of muscle fibers and appears to exacerbate 2–3 days post-exercise48. Furthermore, multiple factors such as muscle architecture, muscle typology, individual fitness, age, sex, and genetic variability may contribute to the wide inter-subject variability in the response to eccentric exercise24,41,49. The EIMD manifests itself by a wide range of clinical symptoms including delayed-onset muscle soreness (DOMS), stiffness, swelling and various functional deficits such as a loss in force-generating capacity or decreased proprioceptive function41.

On the other hand, there is conclusive evidence that the first bout of eccentric exercise confers protection against EIMD following a subsequent bout of the similar exercise. This process is best known as “the repeated-bout effect” (RBE) and is characterized by a lesser inflammatory and damaging response, attenuated DOMS, less muscle swelling, faster recovery of muscle strength and range of motion50,51. Even though a single bout may confer protective effects52; the magnitude of the protection appears to increase after several sessions53 and it seems to persist for several weeks or even month although the effect diminishes over time54,55. Furthermore, there is no relationship between the magnitude of the damage and the protective effect since it has been demonstrated that repeating bouts of “non-damaging” eccentric exercise can provide strong protective adaptations against subsequent bouts of maximal eccentric exercise56.

Figure 8 Potential mechanisms which may explain the repeated bout effect57.

Several theories have been proposed to explain the RBE, and it seems that there is a multifactorial origin. Potential adaptations have been categorized as neural58,  mechanical59 and cellular51. However, although many studies have attempted to elucidate the mechanisms behind the RBE, a unified theory is not yet available57.

We´ve already pointed out that muscle growth is achieved with both CON and ECC modalities. However, the mechanisms of structural remodelling seem to be contraction-specific60. ECC results in a markedly greater increase in fascicle length while CON promotes greater changes in pennation angle (PA), likely reflecting the differential addition of sarcomeres either in series or in parallel, respectively36,61. Thus, changes in muscle architecture could have an impact on the functional properties of muscles62. Moreover, it has been suggested that contractile material placed in series can have a “protective” impact after eccentric EIMD63, also because of the increase of maximal force produced at longer muscle lengths64. Furthermore, It has been also shown that ECC loading may positively impact tendon force65 and extracellular matrix remodelling66. 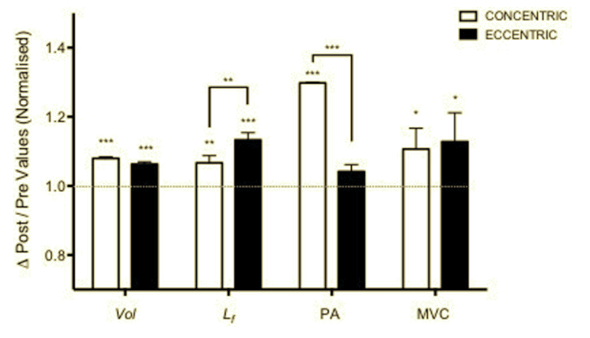 The length-tension relationship plays a very important role in the function of skeletal muscle. The magnitude of force a muscle can generate depends on its length, velocity and stimulation67. ECC contraction has also important implications in rehabilitation settings because it can influence the shift of the optimum length-tension relationship, with notable repercussions on performance and injury prevention67. In fact, the addition of sarcomeres in series appears to directly impact the maximum velocity of shortening of muscle fibers. Thus, eccentric contractions, while favoring the increase in Lf without presenting significant changes in PA, may have a profound influence on muscle performance68 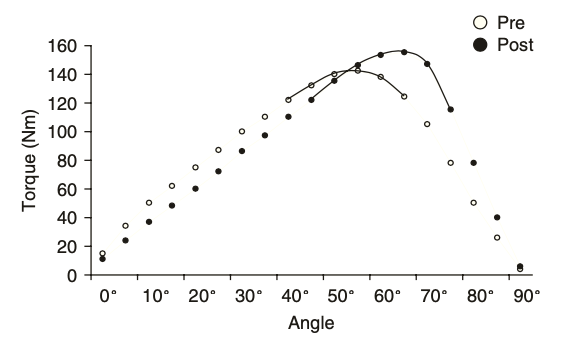 It seems that eccentric contractions exhibit unique neural characteristics compared with concentric and isometric contractions under both maximal and submaximal loads indicating that the nervous system employs unique activation strategies during eccentric 10,69.

When compared with concentric or isometric contractions, eccentric actions seem to have lesser recruitment and discharge rates, which supports the rationale behind higher magnitude eccentric loading70,71. Furthermore, the acute improvements seen during the concentric phase after an accentuated eccentric contraction may be due to an enhanced neural drive72. This neuromuscular response may be explained in part due to enhanced cortical excitability, which seems to arise as a compensatory mechanism for spinal inhibition during eccentric action73. 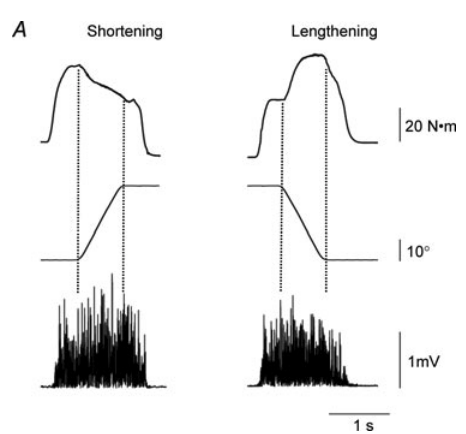 Figure 11 maximal shortening and lengthening contractions with the dorsiflexor muscles against a torque motor. Despite 10% less activation (EMG) during eccentric action, there was an increase of 15% in the torque produce during lenghtening69.

Moreover,  It has been demonstrated that high-threshold motor units can be selectively recruited during eccentric contractions, particularly at fast eccentric velocities74. In addition to increased neural drive and selective recruitment of high threshold motor units, eccentric lengthening may lead to other recruitment strategies which may be related to changes in the motor-evoked potentials75 which may have the ability to create neural adaptations at the spinal level.76 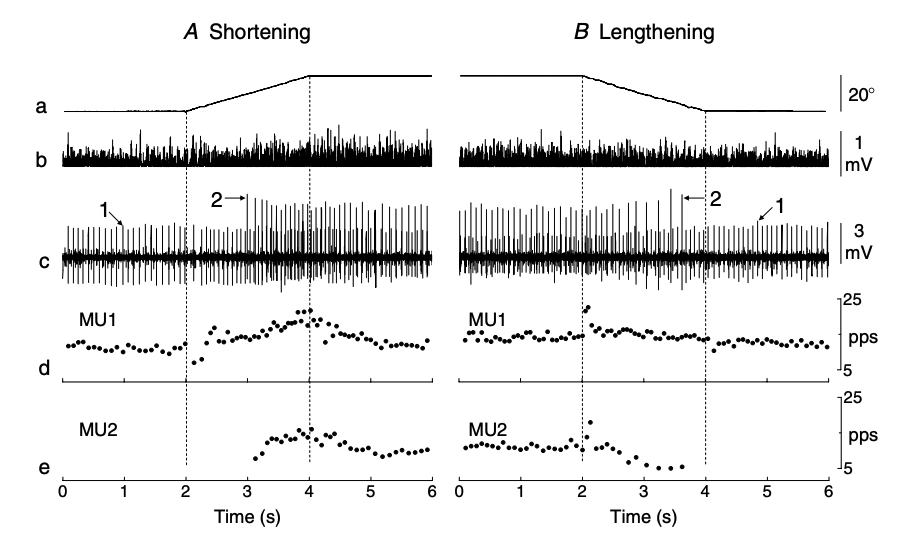 46.Chen, B. & Shan, T. The role of satellite and other functional cell types in muscle repair and regeneration. Journal of Muscle Research and Cell Motility 40, 1–8 (2019).

51.McHugh, M. P. Recent advances in the understanding of the repeated bout effect: the protective effect against muscle damage from a single bout of eccentric exercise. Scandinavian Journal of Medicine and Science in Sports 13, 88–97 (2003).

63.MORGAN, D. L. & TALBOT, J. A. THE ADDITION OF SARCOMERES IN SERIES IS THE MAIN PROTECTIVE MECHANISM FOLLOWING ECCENTRIC EXERCISE. Journal of Mechanics in Medicine and Biology 02, 421–431 (2002).