Benefits of front squat for athletes

The front squat is one of the most repeated exercises in gyms and boxing. CrossFit has made this type of exercise trendy and many people every day place the bar above the clavicle, bend their elbows and place their fingers under the bar. However, what benefits can this exercise bring? Is it safe to do for beginner athletes? And advanced athletes? The front squat has certain biomechanical differences from the back squat. The position of the spine, the flexion of the hip, the dorsiflexion of the ankle is different. In this week’s blog article the aim is to be able to offer enough information so that coaches and athletes know what the benefits and advantages of this exercise are and what the limitations are. In the same way, we will analyze if the performance of this type of exercise offers more than a back squat or any other movement focused on improving strength in the lower body.

In this week’s article we are going to focus on the best options for improving strength and therefore endurance in leg training. Strength training has positioned itself at the top of the training pyramid in recent years and its application has a directly proportional relationship with the improvement of sports performance. There is sufficient evidence to confirm that strength training has the key characteristics for exercise programs to be safe, effective, and efficient (1). It has already been shown in a healthy but non-athletic population that the improvements from strength training are dose-dependent, that is, depending on the amount of volume and intensity at which the training is done, the improvements will be one or the other. The American College of Sports Medicine (ACSM), one of the greatest eminences regarding exercise and health recommendations, establishes which are the best indications for improving strength for novice and experienced people (2). However, Peterson et al. (2004) (1) wanted to show that a similar situation also occurs in athletes. To do this, they carried out a systematic review and meta-analysis with more than 37 studies and concluded that athletes who trained at an intensity of 85% of their maximum repetition (hereinafter RM) 2 days a week and with a mean of 8 sessions per muscle group obtained the greatest improvements from the outside. In addition, several studies have confirmed that those athletes who perform strength training in addition to resistance training obtain better sports results (3-5). But what about specific leg training? How is the squat strength related to improving athletic performance?

The lower body is the anatomical part that has the greatest function in any type of sport, from volleyball to football and even in hockey or paddle tennis. The strength of the lower body allows it to have a greater range of motion, a better force and speed of reaction and of course a better energy efficiency. In addition, there is evidence that an improvement in the strength of the lower body has a transfer in the performance of different sports disciplines such as sprinting, jumping or throwing (6, 7). For the development of the lower body we find different training methods, exercises and methodologies. For example, an exercise for improving quadriceps strength is the knee extension, leg press, or squat. Even within the squat we have different types of squat: back squat, a front squat, squat with safety bar or Smith machine squat, among others. There are different studies that have compared the front squat versus the back squat. The first one we would like to mention is the study by Gullet et al. (2009) in which they defined which muscles are involved in both exercises and where certain differences between the front squat and the back squat can be seen (8). As can be seen in figure number 1, even with the naked eye, we can see how the ankle flexion, the trunk flexion and the position of the arms are very different between both types of squat. 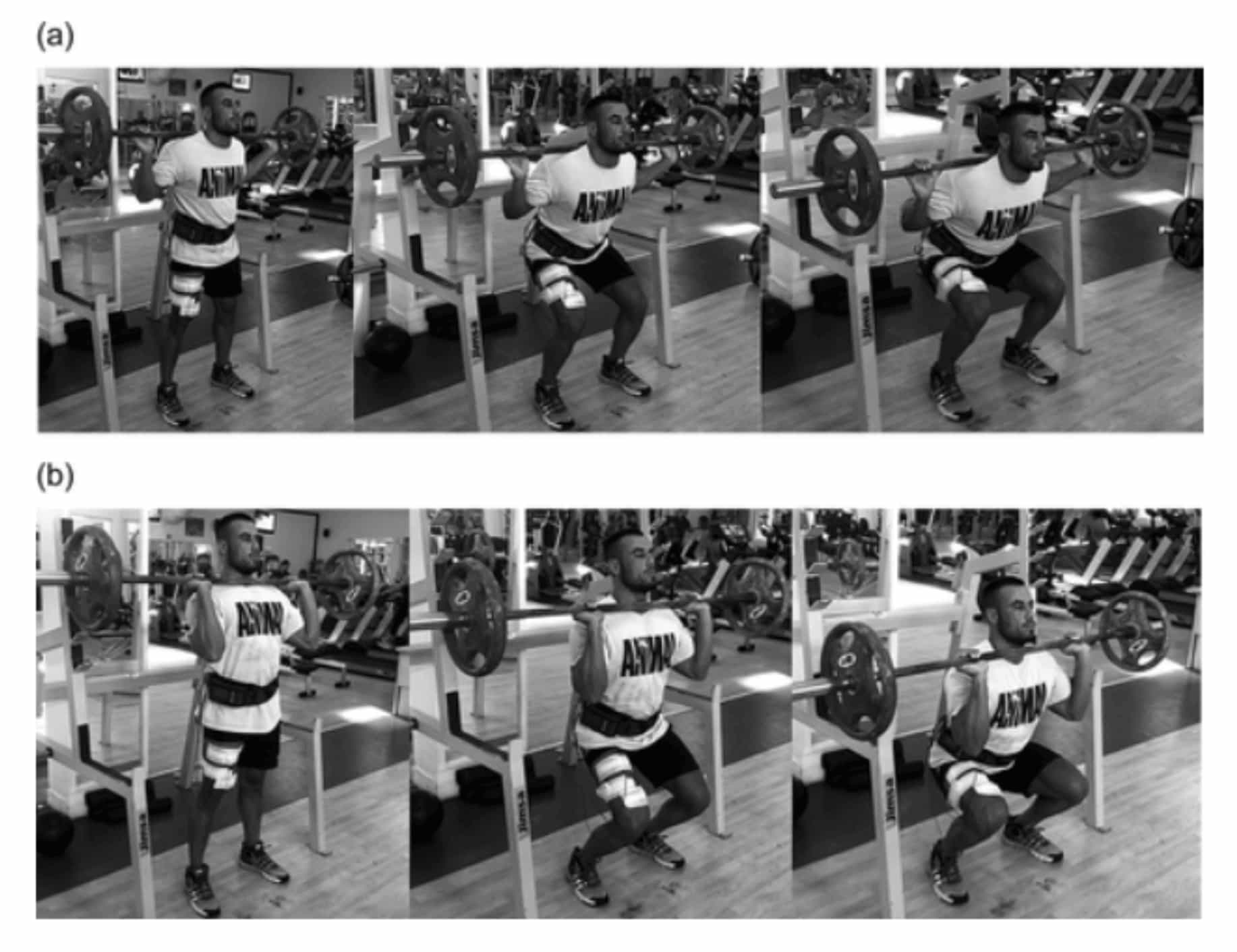 Once the biomechanical differences of movement are known, it is time to analyze whether there really is a greater participation of one muscle group or another. In this regard, Yavuz et al. (2015) compared by means of surface electromyography which muscles had the greatest impact in both the front squat and the back squat (9). To do this, they placed the electromyograph in such a way as to measure the activity of the vastus lateralis, vastus medialis, rectus femoris, semitendinosus, biceps femoris, gluteus maximus, and erector spinae. The results of this study show that there are differences between the muscles that participate in both exercises. Thus, for example, it was found that there is greater activation of the vastus medialis during the front squat and greater activation of the semitendinosus during the back squat. In addition, the front squat seems to have a lower trunk inclination so there is less risk of injury, especially in the lower back.

On the other hand, the study by Spitz et al. (10) analyzed the differences between the load and the speed of movement of the bar performing both types of squat and showed that there are no significant differences between both types of squat. This means that when performing a front squat and a back squat the relationship between the load being moved and the speed at which it is moving is similar. As we already know, there is a direct and inversely proportional relationship between the speed of execution and the weight to be lifted. The higher the weight, the lower the speed and the lower the weight, the higher the speed.

The front squat seems to also come out favored when compared to the back squat and the parallel squat. The study by Contreras et al. (2016) (11) positions the front squat as a good alternative to the back squat for women with good hip and ankle mobility. It should be noted that in order to perform a front squat with good technique, it is necessary to make a certain progression and gain mobility in the lower trunk. Also, as we defined at the beginning of this blog article, lower body strength is key in certain sports due to its transfer to horizontal movement power. This same group analyzed the relationship between the hip-thrust (hip dominant), the front squat, and sports performance in young adolescents. To do this, they divided a group that performed a lower body workout focusing on the hip-thrust and another focusing on the front squat. Variables such as vertical and horizontal jump, sprint, 3 RM test of front squat and hip-thrust, and isometric strength of the lower body were measured. The results of the study confirm that after the front squat training the vertical jump and front squat marks are improved while after the hip-thrust training the sprint marks and isometric strength of the lower body are improved. That is why the combination of both types of exercise can offer the athlete enough improvements to improve her marks in all aspects (12).

By way of conclusion, we can affirm that the front squat is presented as a good alternative for lower body work, offering great benefits to athletes. However, the volume and intensity at which this exercise is performed may offer larger or smaller improvements depending on the context. Also, this exercise with bad execution can cause injury or damage. That is why we strongly recommend following a progression with a professional in order to get the most out of such a complete exercise.

END_OF_DOCUMENT_TOKEN_TO_BE_REPLACED

How To Know the Key Performance Indicators in Sport

END_OF_DOCUMENT_TOKEN_TO_BE_REPLACED

How To Know the Key Performance Indicators in Sport