Velocity based training is starting to be a more common tool in the strength and conditioning world, something that we use to barely see in the best facilities around the world, now we can see it even in commercial gyms. However, it’s still a tool that seems to be complicated to apply to sports and recreational training programs. In this article, I will try to give you the tools that you need to apply VBT to your training and your athletes’ workout. Knowing how to apply this tool will not only make training more efficient but also more fun for your athletes.

Being able to know the category where our athletes fall into is critical in the design of any training program for any sport. Some athletes are more efficient using lighter loads. Some others are better using higher loads. Being able to detect this will allow us to know exactly what part of the Force Velocity Curve we should be putting more emphasis on.

As a practical example, most basketball athletes are great at high speeds and lower loads. Exposing these athletes to greater loads and slower velocities will allow them to increase the amount of force they can produce at higher velocities (not to mention the many other benefits that come with high load exposition). Working on the the “untrained” side of Force Velocity Curve (F-V curve) will transfer benefits into the other side. 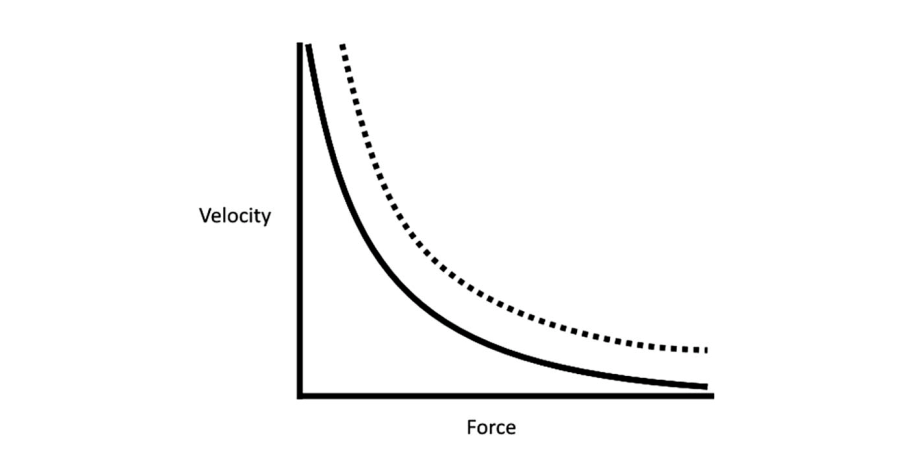 The effect of undulated training in the Force Velocity Curve. (Taber,2016)

Being able to track changes in the F-V Curve will change our way of training. Obtaining a F-V Curve for a specific exercise on a monthly bases can guide us to know when its time to emphasize in one end or the other. If an athlete (team sports) is emphasizing in maximal strength and we start spotting negative effect over the ability to move lighter loads, it means it is time to change our emphasis and maybe focus a little bit more on higher speed movements. This is always going to be much more useful with advanced athletes that are going to need more in-depth training methodologies.

Always remember, do not use this curve as if your athletes were robots. Apply it to each athlete and their needs. Some athletes will have to perform better at different speeds and force levels (OL vs WR in football).

This will probably be the most practical way to use VBT on a daily basis, as well as the next one.

When working with any athlete, we need to understand that fatigue is the most important factor we need to take into account when it comes to planning workouts. Fatigue can be coming from many different factors, but for the sake of this article, we will divide them in Neural and Structural fatigue (a concept from Speed Strength from Joel Smith). The level of fatigue of an athlete is going to determine their ability to handle the load at any given velocity. Using VBT we have the chance to test our athletes. prior to our workouts to determine if they are ready to handle more or less, or even if they should just be going home and resting for the day;

Daily maximum load (or 1RM) is a great way to understand what the state of your athlete is, is using submaximal loads to calculate the daily 1RM. As we explained before, if we have created a force-velocity profile for our athlete in the given lift, this will allow us in the future to just using our warmup loads (preferable to use >80% load) with just a few repetitions with maximum effort, to obtain the daily 1RM to use that given day; if our athlete’s maximum load is 100kg for that day, but he has lifted 140kg sometime in the past, using that 140kg 1RM would be, not only incredibly taxing for his body, but he would also not be able to complete the workout.

In combination with this tool, is important to know your athletes very well; if an athlete comes in without motivation, tired, with low wellbeing scores and after performing submaximal testing we see how his 1RM has highly decreased, it would probably be a good idea to completely change the workout for that given athlete and focus on a different goal for the day.

Continuing with the same topic covered before, another great way to use VBT is intra and inter-set fatigue, to help us determine how much fatigue we want for the day and know when to stop the given set or exercise depending on our training goals.  Being able to control intra and inter-set velocity loss is going to allow us to maintain the quality of the work, especially when we are looking to obtain neurological adaptations.

Studies have proven that using velocity cut off percentages is an incredible tool to determine the goal. Taking a closer look to two studies, they found that the lower the velocity drop intra set (15-20%), the higher increase in jumping and speed performance. Compared to a higher velocity drop of 30-40% where they found that the same strength gains where obtained. The groups using greater velocity loss percentages experienced a higher amount of fatigue, which ended up in a loss of high-speed performance, but a greater hypertrophic response.

This findings are the prove, that more is not better, only better is better. Why would we do more than we need to obtain the desired results? and not only that but doing more is probably going to diminish the results that we are looking for. When training team sports or power-based sports, we need to understand what the needs of the athlete are, and how can we, as coaches, help the athlete obtain those results while keeping him/her at their highest level of performance.

As coaches, we know how important intentionality is when

trying to get faster and stronger and is not always easy to get maximum effort/intention out of your athletes. What drives intentionality and effort? Competition! If you are able to make your athletes compete with one another, you will obtain high levels of effort; but how can we drive competition in the weight room while being safe? This is where VBT comes into play, organizing athletes in different stations using an encoder with their individual set load per athlete, with a velocity goal, you can make them compete to obtain the fastest possible velocity.

The effort is not always easy to control, or to understand, especially if an athlete is of no use to exerting maximum efforts, if we observe any sport closely, we can see that most actions are not performed with maximum effort, or maximum effort is not always required to obtain the best outcome. The use of VBT and its feedback allows us to understand the effort, trying to obtain maximum velocity, with instant feedback with any given load will push athletes to try to increase their velocity in every repetition; and believe, being able to show this to any training individual, at any level, will change their way of playing their sport and training.

Probably the one application you haven’t thought about. Many parts of our training as strength coaches focus on the concentric portion of the lift, and especially when it comes to VBT. However, being able to measure the speed of the eccentric portion of any movement is going to give us key data, not only to understand our athletes better but also to push them during the eccentric portion, let me explain myself. One of the most important factors in the ability to generate force is how quickly can and athlete can relax-contract in a given movement, being able to “fall” and use the gravity in your favor, is going to increase the efficiency of the Stretch Shortening Cycle, which will allow the athlete to generate force, at a faster velocity. 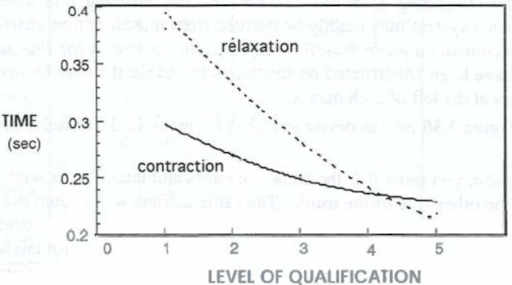 Classification of elite athletes by soviet coaches. Those athletes that classified as elite (5) where highly differentiated from amateur athletes by their ability to relax at a faster rate.

In exercises where our focus is maximum velocity throughout the whole movement, such as oscillatory movements, Vitruve gives us the ability to measure the speed of the eccentric portion of the lift, to assess the ability that that athlete has to relax-store and release energy in the most efficient manner. Having these numbers will allow us to give the athlete feedback on “falling” to later catch themselves and use gravity in their favor. Falling is a concept explained by Adarian Bar.