Since Speed4lifts started in 2017, we’ve been focused on improving the product always guided by all the feedback you have given us. We are very grateful, since this is what has guided us in the construction of this new version.

Taking advantage of the launch of our new corporate identity, Vitruve, we’ve decided to introduce a few improvements that are quite in demand and not possible to implement in the Speed4lifts encoder. Many of the improvements are not yet working in this encoder, however they will be possible to develop, since, as we will see later, most of them depend exclusively on the apps.

We continue relying on the linear position transducer technology, since at the moment it has not proven to be scientifically reliable enough for us to consider moving to a smaller technology such as an accelerometer. From the beginning we have put validity first, and we will continue to do so. We are Vitruve users ourselves, which is why this company was born, and we are not going to offer you something that we, ourselves, would not use in our training. However, we continue to research the future of VBT (Velocity Based Training) technologies to always bring you the highest innovation and quality.

IMPORTANT: If you have a Speed4lifts, and you want this new version, write us because we have a renewal plan in place so you can have the new device at a very reduced price in exchange for your old encoder.

Upgrades of the new version

Although the exterior and materials are the same as before, we have introduced some performance improvements:

1.- Bluetooth connection: Without any doubt, the most important and significant improvement This new Vitruve encoder has a Bluetooth connection, unlike the previous one, which was connected via Wifi. However, we didn’t remove the Wifi, but it has both technologies, being the Bluetooth always activated by default. We recommend to always use the Vitruve encoder by Bluetooth, since this is the way we get the most out of it as we will see next.

2.- Battery with double capacity: We have increased the battery capacity, from 2000 mAh to 3000mAh, yet we have achieved to increase its average duration more than 2x in time of use!  Going from about 9h of use to about 25h. We have accomplished this in two ways: changing the processor (it is now more efficient) and introducing battery saving algorithms, for example, disconnecting the screen between series, putting some internal parts in suspension when the encoder is not used, etc.

Battery life is crucial for equipments with several encoders, in many cases more than 15 units per gym, so being able to charge it every 10-15 days is an asset!

3.- Over The Air Updates: Or in other words, being able to update the firmware of our encoder from our mobile device as you would do with an action camera or any other hardware device on the market. In this way we will be able to continue improving the encoder as time goes by, making it more accurate, adding new variables, saving the use of the battery, etc.

4.- Faster and more efficient processor: the processor is twice as powerful as the previous one, which gives us the advantage of being able to measure variables that require more precision such as vertical jumps at high speed, punches, etc. Variables where the Speed4lifts encoder could fail if they were made at very high speed. It also allows us to collect and send new very interesting variables described below:

Without a single doubt, the best advantage of this new encoder is to obtain new variables that are highly demanded by trainers and that the Speed4lifts encoder is not able to measure properly:

1.- Curves of space, velocity, force, power… Due to the power of the processor, among other things, we are able to obtain and paint all these curves that will allow us to see stagnation points, improvements in the velocity and force applied as a function of time, etc.

2.- Vertical jump, RSI, RFD... It is really a derivation of the previous point, as we have a better processor and we can obtain all the possible variables that an encoder can throw, we will be able to implement RSI tests, different types of vertical jumps, etc. These are features that at the date of writing this post are not ready since they depend on the apps, but the encoder is 100% ready for it and will be available in the following months.

3.- Infinity of exercises: Due to changes in the algorithms of detection of movements of the encoder, we are going to be able to have different types of exercises, to create new exercises, and to give freedom to the trainer or the athlete that he can measure many new exercises. This is something that becomes especially complicated in the Speed4lifts encoder, and that limited its use to a great extent. This functionality also depends largely on apps, and at the time of writing this post, it is a functionality that is not implemented, but will be in the coming months.

Having seen all the hardware improvements, I want to clarify the present and future of our iOS and Android applications, although there is a specific post talking about the new software that has come with the rebranding.

When entering into the App Store, the application will no longer be called “Speed4lifts”, but will have been renamed “Vitruve”, with the new logo. However, your account that you created in Speed4lifts will still work and you won’t lose your data, the only thing you will see is a new interface, somewhat renewed, and some improvements inside.

This app can be used with both Speed4lifts and Vitruve encoders.

For Android users, as we already announced a few months ago, there will be no future updates or rebranding, so the Android app will continue to work as it used to, without noticeable changes. Android users will be able to use the Vitruve encoder with the Wifi connection configuration, but we strongly advise against its use. If you are an Android user and want to have a Vitruve encoder, we recommend using an iOS device, either iPad or iPhone.

As we explained in the post about the new software, we have developed a new software in iOS for coaches, where you can manage hundreds of athletes and coaches without a limit, as well as have premium features such as a ranking/leaderboard of athletes to make them compete against each other. This application will be premium, but we made available a free trial period without having to enter a credit card so you can try it and give us your feedback! 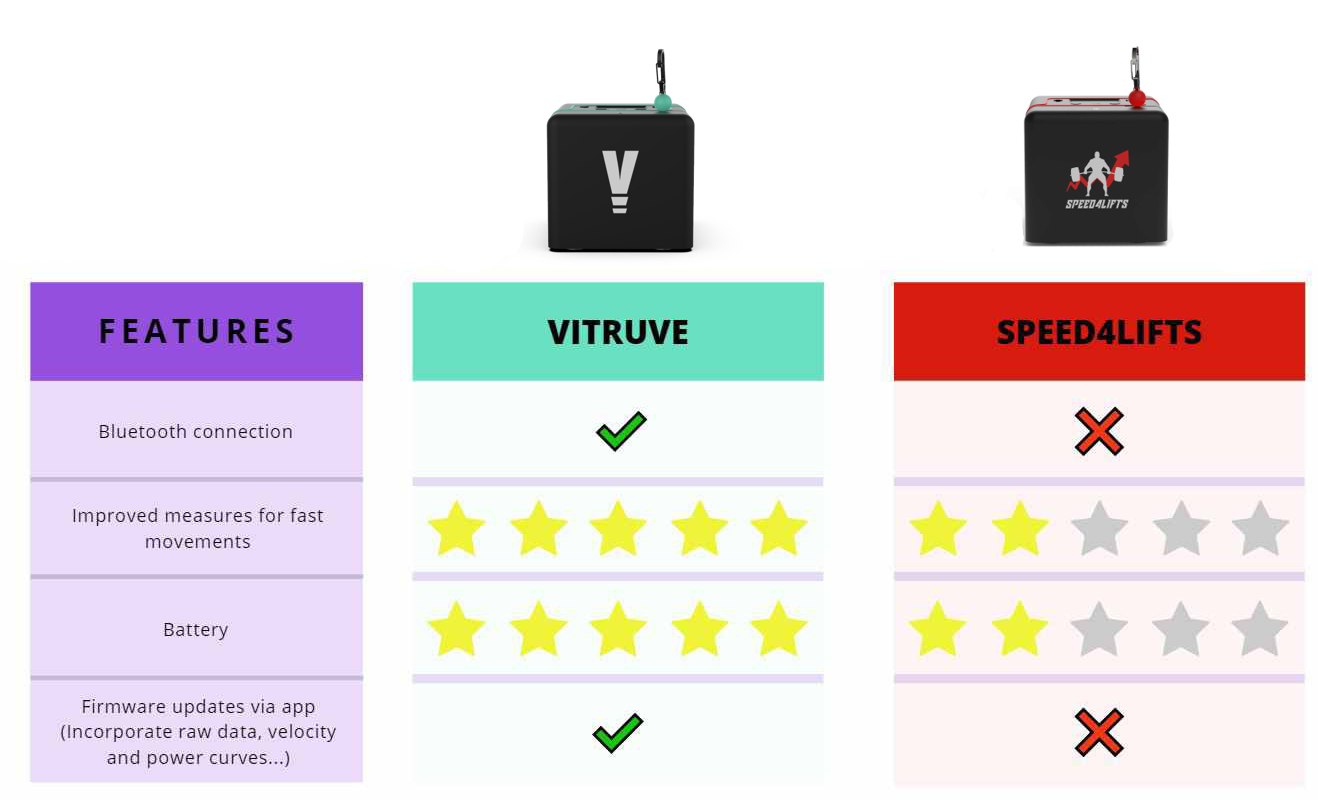 And remember that as usual, you have 30 days of trial of the new Vitruve linear encoder, since the package is sent, so you can test the new features thoroughly, and if you are not satisfied, return it!

If you have any doubt write us here!